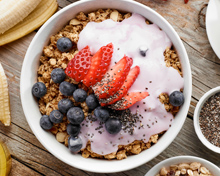 Although our bodies come equipped with detoxification systems, they could do with a boost every now and then.